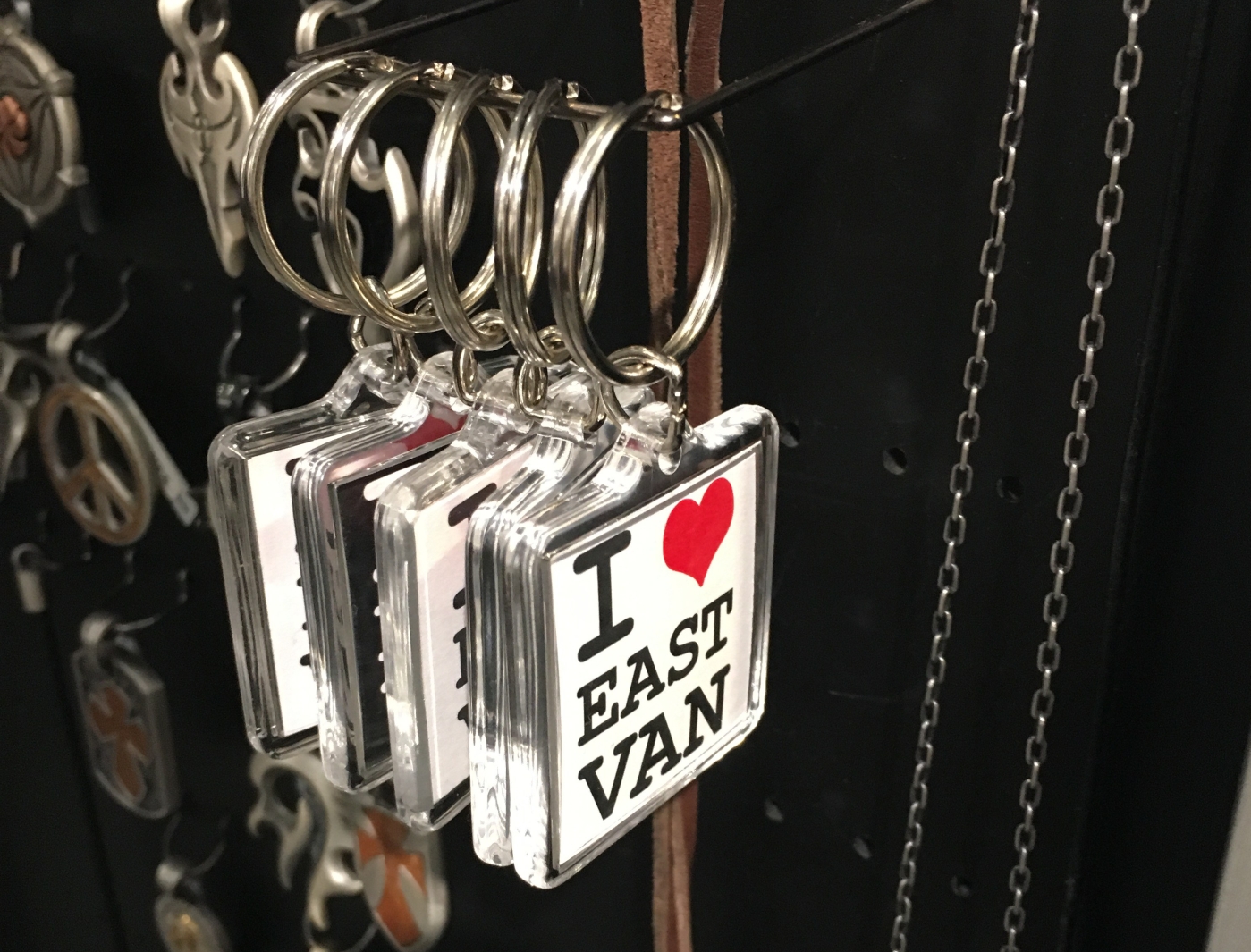 And nowadays, there’s a wealth of merchandise that people can purchase if they want to declare their affection for and allegiance to East Van. 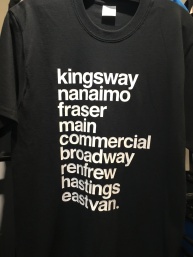 A selection of the merchandise available for sale at Blue Sky Clothing on Commercial Drive.

In Vancouver, city councillors are elected to represent and govern the entire city. There is no one elected solely by and for the constituents of east Vancouver. There is no subdivision of the city into geographically defined wards.

The City of Vancouver does, however, describe itself as having 23 distinct areas. But the definition of these areas is neither simple, nor settled.

“Neighbourhood boundaries provide a way to break up the city’s large geographical area for delivering services and resources and identify the distinct culture and character of different areas of our diverse population. However, there is some disagreement on all of the names and boundaries of these areas.” 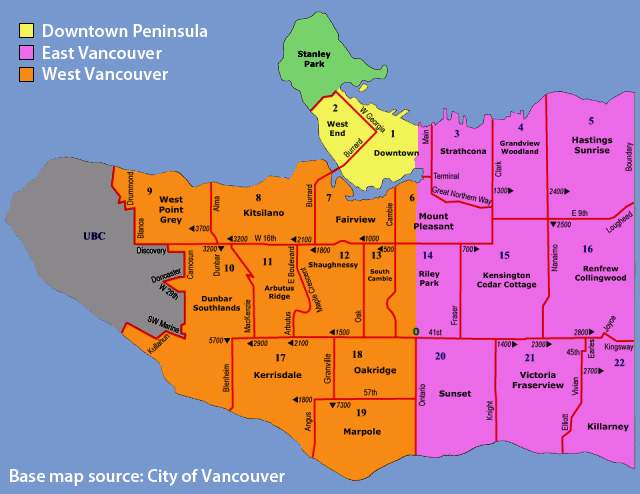 Looking at a map, it’s immediately clear that eight of the 23 areas in Vancouver are wholly east of Ontario Street. The boundaries of Mount Pleasant and Riley Park meander over the dividing line. Chinatown and the Downtown Eastside aren’t on the map at all because they’re subsumed into Strathcona. All of this makes it difficult to get a statistical or demographic snapshot of the entirety of east Vancouver.

To further complicate things, the neighbourhoods themselves have different histories and demographics.

Strathcona, the oldest of the east Vancouver neighbourhoods, has an average household size of 1.7. The median annual income is just shy of $22,000 and 79 per cent of residents live in apartment buildings.

Victoria-Fraserview, which is at the south end of the city and was mostly undeveloped until the 1940’s, has an average household size of three. The median annual income is just over $68,000. Seventy-four per cent of residents live in houses or duplexes.

This house, located in the Victoria-Fraserview neighbourhood, is an example of the Vancouver Special. These affordable homes proliferated in East Vancouver’s neighbourhoods between the 1960’s and 1980’s.

Affordability: As the wind blows

Before Vancouver became a city in 1929, the industrial activity of the docks, mills and railroads was concentrated in the east. According to Andy Yan, an urban planner and director of the City Institute at Simon Fraser University, wind patterns play a role in entrenching east/west divides in industrialized cities like Vancouver.

The pollution generated by industry tends to settle over the eastern parts of cities, making those neighbourhoods less desirable for the wealthy.

“It’s a story that happens throughout cities,” Yan said. “What’s critical to understand for East Vancouver is that it’s deep in the DNA, it’s a working-class, blue-collar neighbourhood.”

The affordability of east Vancouver, according to Yan, led to a diverse concentration of historically disadvantaged communities.

“The east side is where the largest Indigenous communities are. Low-income immigrants used to find their beginnings in east Vancouver,” Yan said. “It brought forward a particular type of physical and cultural environment which I think is slowly, sadly being lost.”

According to lifelong east Vancouver resident Harley Rose, the divide in the city is an enduring, observable reality.

“If you go along, King Edward, as soon as you hit Ontario, there’s a boulevard with trees. Things get physically nicer on the west side,” he said.

Rose’s friends describe him as “authentically East Van.” He was born and raised by a single, working mother in what the city describes the Grandview-Woodland neighbourhood.

He’s white and his classmates at Grandview Elementary School were Fijian, Laotian, Filipino, Salvadorian and Indigenous. His family didn’t own a home, they always rented. They moved around quite a bit  but his mother could always find something affordable in the neighbourhood. The family stayed close enough to Commercial Drive that he never had to change schools.

Rose credits Britannia Centre with strengthening the sense of community in the neighbourhood.

“It has services for all ages. I’ve taken nieces to their first ballet practices there and I’ve been to band practices at the senior’s centre. They have a pool, a boxing club, an ice rink and a library. Everybody can go and get something from there and they take that back into the community with them,” he said.

Rose operates a company that offers tours of Commercial Drive and says he goes out of his way to take visitors to Britannia. He took swimming lessons there when he was a child. When he became a father, he took his son there. When he takes tourists there, he still recognizes some of the lifeguards.

Rose said that the biggest change he’s noticed in the neighbourhood over the last couple decades is a decline in diversity and affordability.

“Things have gotten a little whiter on the drive,” he said. “There’s definitely more money on the drive, there is a different class of people but I don’t think they’ve overshadowed or seriously gentrified the Drive. I think the character and the tenacity of the community is a little bit stronger than that.”

A decrease in East Vancouver’s diversity was reported by the CBC when the 2016 census figures were released.  A further look at census data shows that between 2006 and 2016, the percentage of low-income residents in every single East Vancouver neighbourhood decreased. On average, the decline was 10 per cent.

Yan attributes the decline in low-income and minority residents on the east side neighbourhoods to “good old-fashioned gentrification.”

Yan says that  affordability was literally built into east Vancouver, via co-ops and purpose built affordable housing.  The majority of planned and existing non-market housing is still located in east side neighbourhoods, according to City of Vancouver data. 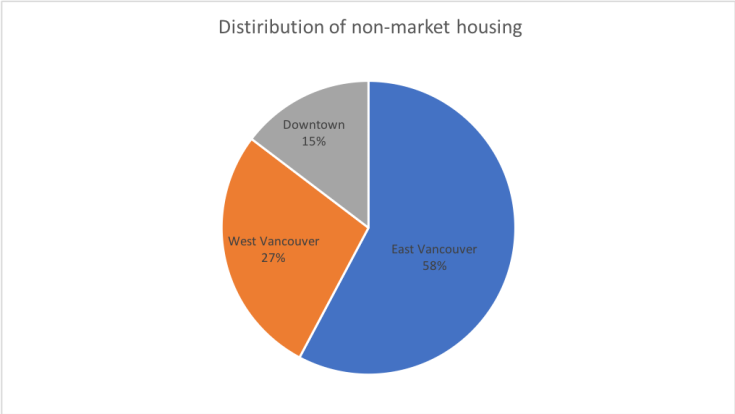 Yan sees the proliferation and popularity of East Van merchandise as part and parcel of the gentrification process.

“It’s a creation of east Vancouver without the politics. Those politics created some of the most interesting things in the city of Vancouver in terms of its art, but then also in terms of ideas about society. It’s where co-ops really are the strongest.  It’s where these ideas of something different are located. ” he said.